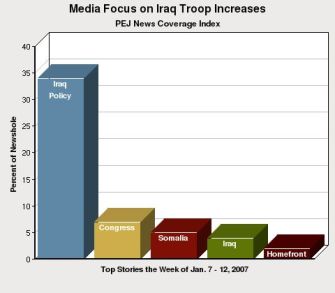 The latest analysis of the week’s top news agenda stories from the Project for Excellence in Journalism shows that despite the Dems best efforts to draw media and public attention to their roster of House bills, most notably stem cell research, coverage of the president’s Iraq policy and national address completely dominated the media agenda:


The debate over what to do next in Iraq thoroughly dominated the news landscape last week, according to the PEJ News Coverage Index. In the second week of the new year (January 7-12) Iraq policy filled 34% of the overall newshole and was the top story in all five media sectors – newspapers, online, network TV, cable and radio. That was followed by events in Congress and Somalia, and two other Iraq-related stories, but none of these even reached double digits in the main Index….

…A week earlier, thanks to the January 4 swearing-in ceremonies, the Democratic takeover of Congress was the biggest overall story. But last week, as those Democrats got down to the business of governing and cast votes on the minimum wage and Medicare drug prices, Congress slipped to a distant second (at 7%). The third biggest story, at 5%, was the dramatic U.S. military attack in Somalia. That story was fueled by reports–later debunked–that the air strikes had killed some of Al Qaeda’s most wanted. The reason Iraq policy overwhelmed the news last week was the President’s January 10 speech committing about 22,000 more soldiers to the conflict. While the substance of his proposals were well known, the political fight that it promised dwarfed every other event in the news…. 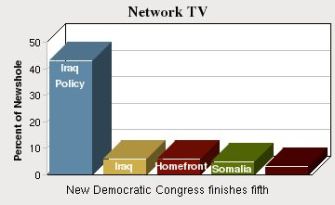 …The Iraq policy debate was an even bigger story on network TV (43 %) and cable (41%), and received its biggest play on radio where it accounted for 46% of the coverage and was fanned by talk hosts on both sides of the political spectrum.

Related
Life
Visualization test
Lorem ipsum dolor sit amet, consectetur adipiscing elit. Nullam id tincidunt mi. Morbi malesuada nulla sit amet est hendrerit tincidunt. Etiam viverra, nisl id volutpat eleifend, est augue sodales orci, […]
L&D Strategy
Transfer of learning: The necessary step to make learning stick
Transfer of learning is a concept that should be top-of-mind when planning any learning and development program. Why? In a perfect world, the billions of dollars organizations collectively spend every […]
Starts With A Bang
Why we’ll never see back to the beginning of the Universe
We thought the Big Bang started it all. Then we realized that something else came before, and it erased everything that existed prior.
Thinking
Is there an afterlife? See how your answer compares to polled Americans
There is more consensus on what heaven looks like than hell.
Thinking
How science changes the way we think, according to 10 leading scientists
A group of prominent scientists shares how research has changed them.
Up Next
Guest Thinkers
Project for Excellence in Journalism Releases First Weekly News Agenda Analysis
Every Tuesday, the Project for Excellence in Journalism will be releasing their weekly news index report, an analysis that tracks the major stories across media sectors including daily newspapers, online […]