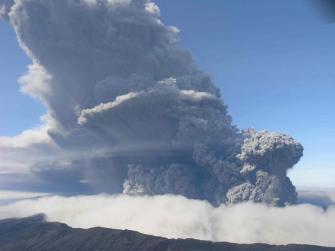 Strong volcanic tremor on 2 August prompted AVO  to raise the Volcano Alert Level to Warning and the Aviation Color Code to Red. Cloudy conditions prevented satellite observations. Later that day, AVO geologists in the area reported that ash-and-steam plumes rose to minimum altitude of 6.1 km (20,000 ft) a.s.l. The seismicity decreased and the Volcano Alert Level was lowered to Watch and the Aviation Color Code was lowered to Orange. Observers in Ft. Glenn on Umnak Island reported smelling sulfur and seeing a larger ash plume than earlier that day. The plume drifted ESE. On 3 August, helicopter and ground-based observers indicated a lower-altitude ash plume along with a higher steam plume. Satellite imagery revealed that ash plumes at altitudes of 9.1-10.7 km (30,000-35,000 ft) a.s.l. drifted SSW. On 4 August, ashfall reported in Nikolski had accumulated to a depth of 3 mm. During 4-5 August satellite imagery and pilot observations indicated that ash plumes rose to altitudes of 3-7.6 km (10,000-25,000 ft) a.s.l. and drifted SW and W.

nSounds like Okmok is continuing to emit ash high enough to get into air travel lanes over the Aleutians. There was an interesting report on the events that lead up to the eruption … well, all 5 hours of events before the eruption. Tina Neal from AVO says that they really did only have a few hours of “anomalous events” at Okmok before the caldera erupted, and they didn’t even know it had erupted until eye witness accounts had come in from the Coast Guard and fishermen. She also mentions that pumice has washed up on other islands from the eruption. Cleveland Volcano is also briefly discussed, but she reminds us that it tends to erupt with more frequency than Okmok. Again, just like Chaiten, these events remind us that predicting volcanic eruption is still in its infancy!

Related
The Future
Custom Image Test
Lorem ipsum etc etc etc etc
Life
Visualization test
Lorem ipsum dolor sit amet, consectetur adipiscing elit. Nullam id tincidunt mi. Morbi malesuada nulla sit amet est hendrerit tincidunt. Etiam viverra, nisl id volutpat eleifend, est augue sodales orci, […]
L&D Strategy
Transfer of learning: The necessary step to make learning stick
Transfer of learning is a concept that should be top-of-mind when planning any learning and development program. Why? In a perfect world, the billions of dollars organizations collectively spend every […]
Starts With A Bang
Why we’ll never see back to the beginning of the Universe
We thought the Big Bang started it all. Then we realized that something else came before, and it erased everything that existed prior.
Thinking
Is there an afterlife? See how your answer compares to polled Americans
There is more consensus on what heaven looks like than hell.
Up Next
Guest Thinkers
Kasatochi erupts
Just a quick update if you haven’t been following the discussion: Kasatochi volcano in the Aleutians is now listed in “Red Alert” as it is erupting (see image above). Not […]