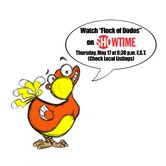 I’ve got my DVR set to 830pm EST tonight in order to record in high definition the world television premiere of Flock of Dodos: The Evolution-Intelligent Design Circus.

This past spring, I contributed to a Center for Social Media and Ford Foundation report evaluating the social impact of documentary film. Beyond any influence on general audiences, Randy Olson’s Dodos has had what I describe in the report as a significant “social movement” impact, and in this case, by movement I mean scientists. As we noted in our Framing Science thesis, the film painfully demonstrates the tendency for scientists to condescend to or even attack citizens’ core social identities (see notably, the now famous “Poker game” scene.) By taking his film on the road over the past two years, in an entertaining and informative way, Olson has generated greater attention among scientists and their organizations for the pressing need to question assumptions when it comes to broader public communication.

Now that the film is premiering on Showtime and available this summer on DVD, you can expect impact to grow.

This spring in the sophomore-level course I teach on “Communication and Society,” we spent several weeks examining the many ways that individuals and groups are using the internet to alter […]