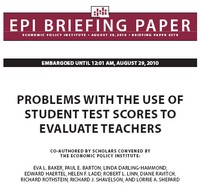 The Economic Policy Institute’s new report, Problems with the Use of Student Test Scores to Evaluate Teachers, cautions against heavy reliance on the use of test scores in teacher evaluation.

Should we be paying ‘invisible’ education professors?

The latest issue of EDUCAUSE Review has a number of excellent articles on openness. One that particularly resonated with me was Maria Andersen’s To Share or Not To Share: Is […]