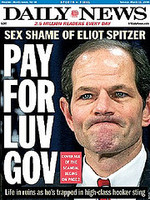 In the end, this was probably inevitable, given his deep connections to the more nefarious “players” in Washington and New York political circles… Former New York “Luv Guv” Eliot Spitzer recently announced plans to become the CEO of new online dating site Cloud 9 (an obvious reference to his former distinction as Client #9). Spitzer spokesperson April Won is already calling the site “a mix between social networking site Facebook and online dating site eHarmony.com” for well-connected politicians and socialites.

In an era in which Martha Stewart can emerge from prison an even bigger celebrity than when she left, and disgraced public figures profit from their misdoings by writing tell-all biographies or appearing in tawdry made-for-TV specials, it’s perhaps a sign of the Web 2.0 times that Spitzer chose to throw his considerable “star power” behind an untested Silicon Valley start-up.