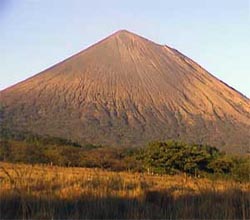 I don’t have much in the way of details, but the Associated Press is reporting that San Cristobal in Nicaragua has erupted this evening. The volcano reportedly experienced an explosive eruption and that nearby villages (how nearby is unclear) have received ash fall from the eruption. If it is any indication, government officials did issue a warning to 25 districts around the volcano and so far no casualties have been reported.

UPDATE 8:30 AM (EDT) 9/7/2009: A few more details have come out about the eruption. The ash plume reached ~8,000 m / 26,000 feet, although the nature of the plume is unclear (ash, ash & steam, most steam?) It also appears that there were a number of explosions that accompanied the plume. However, it doesn’t seem that many towns are experiencing any ash fall except for Chichigalpa.

The AP article incorrectly states that San Cristobal last erupted in 2006 — in fact, it erupted in 2008, producing small (VEI 1) explosive events in June and November of that year. The last larger eruption was in November 2005, when a VEI 2 eruption produced explosions and ash fall. San Cristobal has a history of frequent eruptions (almost annually) that are mostly strombolian explosions from the central vent, however in 1999, an eruption produced lahars prompting evacuations near the volcano.

There is a webcam for San Cristobal, but as of this evening, it looks, well, a little out of focus.

Friday Flotsam: Kanlaon seismicity, the media loves Yellowstone and none like it hot.

Seismicity has increased at Kanlaon in the Philippines, PBS jumps on the Yellowstone gravytrain and we dabble in “manmade volcanoes”.