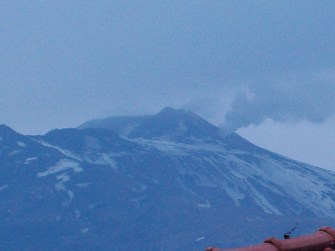 Eruptions reader and member at Italian National Institute of Geophysics and Volcanology in Catania, Dr. Boris Behncke, has been keeping many of us appraised on the goings-on at Mt. Etna. A series of earthquakes occurred on April 2-3 along a fault near the north flank of the volcano – 175 earthquakes in all producing some impressive results – and Boris has noted increased “rumblings” at Etna since. This has culminated in explosions and ash April 7-8. Most of the ash appears to be made from merely crushed rock of previous eruption – accidental material rather than new juvenile magma, but all of this suggests that Etna could be headed for a new eruptive period. There has also been an increase in the gas emissions from the volcano – all signs that new magma may be rising in the conduit and a new eruption is approaching. Etna erupts quite frequently, but has been relatively quiet over the last few months, with little in the way of obviously eruptive activity.

Hawai`i in Iceland: The style of the Eyjafjallajökull-Fimmvörduháls eruption

The current Eyjafjallajökull-Fimmvörduháls eruption is exactly what you might expect for an eruption in Hawai`i … in Iceland … actually, both!