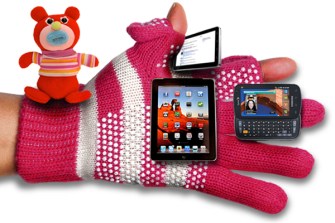 Why do we love our digital devices? The answer might surprise you — it’s not because they look good, feel good or are somehow aspirational of where we want to be in life. It’s because they are increasingly becoming a “second self” that we carry with ourselves wherever we go. In the New York Times, Damon Darlin recently interviewed a number of leading design thinkers – including Mark Rolston of frog design and Don Norman of Nielsen Norman Group – who are coming to the consensus that we love certain objects for what they contain within, rather than their sleek exteriors:

“The devices — whether a flat-screen TV, an EVO Android smartphone, a Toshiba laptop or a Samsung Galaxy tablet — have become frames around a screen that gives us access to the amazing software that is that brain. Designers have begun to refer to that screen, in whatever device it is in, as “the window.” The frame keeps getting smaller and the window gets larger and clearer.

In other words, what we’ve become attached to is not the glass and metal and plastic, regardless of how it is beveled, but to the software running on the device. The love wasn’t there until the software got smart enough. “I doubt that people really loved their cellphones,” says Don Norman, a principal of the Nielsen Norman Group, a design firm, and author of “Living With Complexity.” The software inside a smartphone changed that. He thinks people merely like their Amazon Kindle e-readers, but don’t love them because the software doesn’t function as an auxiliary brain.”

It’s all part of a changing concept of the way that people interact with objects that MIT’s Sherry Turkle refers to as “evocative objects” — everyday gadgets and devices made of glass & plastic that have the power to impact things like memories, relationships, ideas and emotions. These evocative objects are designed to create emotion and empathy.

For any company that sells devices (or appliances or other gadgets) – the mandate is clear: Focus less on designing a sleek, attention-getting exterior and more on the software “brain” that create the inner magic. It will be interesting to see how design firms respond to this mandate – whether or not they will refocus on the “intangibles” rather than the exterior design.

Likewise, it will be interesting to see how the Android operating system — a worthy rival to the Mac OS X – will force Apple to change its design aesthetic. When the first iPad came out, it had no worthy challengers and was immediately lauded as a design and even fashion object. Now that challengers like the Samsung Galaxy are gaining traction, sophisticated buyers are starting to focus more on the operating system (Android vs. Mac OS X) and less on the “frame.”