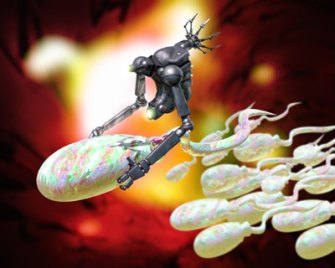 My colleague Dietram Scheufele is lead author on a study in the latest issue of Nature Nanotechnology. In their survey work, Scheufele et al. find that experts are more concerned about the health and environmental risks of nanotech than the public at large. This gulf in perceptions is despite a widespread lack of knowledge about the issue among citizens. See the press release.

The findings are consistent with a study I published earlier this year with another University of Wisconsin colleague Dominique Brossard. In our survey analysis examining American perceptions of plant biotechnology, we describe as a strong value construct in American culture the tendency to automatically defer to scientific authority and expertise.

On most issues, most of the time, the preferred heuristic for the public is to trust scientists and government regulators. In other words, absent any cues that an emerging area of science might conflict with a rival value system such as religion or environmentalism, the public for the most part prefers not to know much about the risks or benefits of a technology. All that is needed is for scientists and regulators to reassure the public that a product is safe.

With nanotechnology, at this stage in its mediated issue development, no news is good news. Nanotech remains covered at the science and business pages and has yet to spill over into the wider public eye. Moreover, this limited amount of coverage remains strongly framed in terms of social progress and economic development.

However as I note with Scheufele in our article at The Scientist there are signs of a possible emerging frame shift. Yet until competing elites start to actively frame the issue in terms that trigger the application of values other than a default deference to science, expect the public to remain blissfully ignorant and supportive of nanotech.

Related
The Future
Custom Image Test
Lorem ipsum etc etc etc etc
Life
Visualization test
Lorem ipsum dolor sit amet, consectetur adipiscing elit. Nullam id tincidunt mi. Morbi malesuada nulla sit amet est hendrerit tincidunt. Etiam viverra, nisl id volutpat eleifend, est augue sodales orci, […]
L&D Strategy
Transfer of learning: The necessary step to make learning stick
Transfer of learning is a concept that should be top-of-mind when planning any learning and development program. Why? In a perfect world, the billions of dollars organizations collectively spend every […]
Starts With A Bang
Why we’ll never see back to the beginning of the Universe
We thought the Big Bang started it all. Then we realized that something else came before, and it erased everything that existed prior.
Thinking
Is there an afterlife? See how your answer compares to polled Americans
There is more consensus on what heaven looks like than hell.
Up Next
Guest Thinkers
63% of Election Coverage Focuses on Strategy Frame
As I have detailed in past studies and as we write in the cover article at The Scientist, the dominant frame that appears when science turns political is the “strategy” […]