The American University campus surged with excitement and energy today as thousands of students and supporters gathered hours before the rally to bear witness to the Kennedy family’s historic endorsement of Barack Obama for president.

Needless to say, college branding doesn’t get much better than this. It also makes for great discussion in my Political Communication seminar tomorrow night. A former grad student, David Corey, was blogging the event in real time. 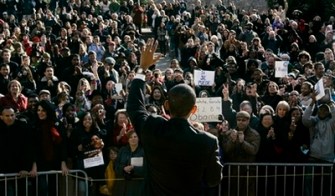