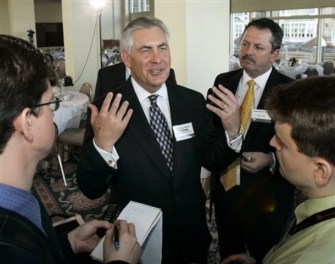 Is ExxonMobil CEO Rex Tillerson a PR juggernaut who takes advantage of the ideological innocence of general assignment and TV reporters?

In his regular column at Portfolio magazine, former NY Times editor Howell Raines observes that market ideology and the absence of an energy beat (see this post), are combining to give the oil companies a free pass when it comes to news coverage of gas prices.

Raines was interviewed last week by NPR’s On the Media about his column (transcript, audio above). As Raines defines the problem, general assignment reporters–lacking a specialization with the topic–are far too quick to file stories that focus narrowly on consumer suffering, and in the process they fail to draw attention to far bigger forces at play:


The oil companies have gotten away with a very simplistic explanation, that this is purely supply and demand. And they cast themselves as helpless victims of supply and demand. We have a supply crunch because of a calculated decision on their part to 1) cut back on exploration, 2) close half of the refineries that we had only a few years ago, and 3) to redirect all of their spending from things like research and development into profits. So, none of these things are unpredictable or accidental.

As Raines observes, reporters in their 20s to 40s are likely to be far less skeptical of the type of “supply and demand” evasiveness offered by oil company executives and many political leaders:

We’re all creatures of our moment in history and our larger society. The cultural ethos that flowed out of the Depression and World War II was one that was very challenging toward the prerogatives of corporations. The business culture that took root in the Reagan administration is one in which the idea that taxes are evil has become deeply entrenched and the idea that corporate prerogatives ought not to be regulated.

So I’m saying that there is a less challenging mentality in the press as a whole than there was 40 years ago. And let me say that I did not envision my column as a blanket condemnation of the press but as commentary on how we need here a more vigorous journalism that’s less relaxed about corporate public relations.

When Raines was asked what he thinks reporters and news organizations should be paying closer attention to in their coverage, he identifies the same frame that Democratic strategists James Carville and Stan Greenberg have suggested should be Obama’s line of attack in the energy debate (see this post):

Well, I think right now it’s very important to examine the research and development and exploration figures. If you look at the fact that 80 percent of the lands under lease are not explored, then that casts a whole new light on two primary oil company claims — one, that supply and demand is purely driven by momentary market forces that they can’t control, and the other argument that falls apart is that they need ANWR.

BOB GARFIELD: When you say ANWR, you’re talking about the Arctic Wildlife Refuge?

HOWELL RAINES: Yeah, yeah, right. There’s simply no way that ANWR would come online in time to have any price impact, and, indeed, any long term impact on the problem that we are facing as a society and as a world culture, which is to use the dwindling resources from petroleum to find the energy sources for tomorrow.

And, you know, there are lovely pictures of windmill farms on the advertising, but if you look at the statistical information, the oil companies have made a decision to divert money not into exploration, research and infrastructure development, but into profits. This is not illegal, but it is good to be honest about it.