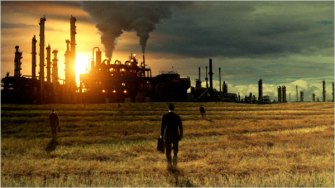 Framing food problems as a matter of public accountability and sinister corporate control.

As I wrote earlier this week, the new documentary Food Inc. has the potential to significantly boost the public profile of a range of food-related problems, connecting them together under the perceptual umbrella of public accountability and corporate malfeasance.

In achieving this goal, it appears that Food Inc. has cleared the first hurdle, garnering strong reviews from the film critics who tend to drive the media narrative about a film including those at the NY Times, New York magazine, the Washington Post, and Rolling Stone. These reviews, of course, are already appearing in ads for the film.

At the NY Times, Mahnola Dargis references her popcorn in the lede and then declares the film:

…one of the scariest movies of the year, “Food, Inc.,” an informative, often infuriating activist documentary about the big business of feeding or, more to the political point, force-feeding, Americans all the junk that multinational corporate money can buy. You’ll shudder, shake and just possibly lose your genetically modified lunch.

At New York magazine, David Edelstein goes even further, echoing the film’s heavy emphasis on the public accountability frame and portrayal of “bad guy” multi-national corporations as an existential threat to our personal freedom, health, and well-being:

After an hour and a half of sighing, wincing, and clucking over the manifold outrages portrayed in Robert Kenner’s Food, Inc., I gave up the thought of “reviewing” the documentary and decided, instead, to exhort you: See it. Bring your kids if you have them. Bring someone else’s kids if you don’t…It’s the documentary equivalent of The Matrix: It shows us how we’re living in a simulacrum, fed by machines run by larger machines with names like Monsanto, Perdue, Tyson, and the handful of other corporations that make everything.

At Rolling Stone Peter Travers has a similar take as his colleagues:

Eating can be one dangerous business. Don’t take another bite till you see Robert Kenner’s Food, Inc., an essential, indelible documentary that is scarier than anything in the last five Saw horror shows.

However, at the Washington Post, Ann Hornaday notes a key question. In favorably comparing the film to Upton Sinclair and An Inconvenient Truth, Hornaday endorses it to readers but observes correctly:

The trick will be getting “Food, Inc.’s” message beyond its natural constituency of the already-converted to the millions of shoppers whose choices in the marketplace, the film argues, represent a tsunami of untapped power.

Inconvenient Truth received similar favorable advanced billing from critics, scored big at the box office, shaped news coverage of the climate change debate, and eventually earned an Academy Award and Nobel prize for Al Gore. Yet survey evidence suggests that not unpredictably, viewers of the film were heavily one-sided liberal, democrat, favorable in their opinion of Gore, and already concerned about climate change.

Food Inc. will no doubt continue the momentum generated by books such as Fast Food Nation and Omnivore’s Dilemma, mobilizing a base of concerned citizens and prompting actions from some policymakers. It’s a potential catalyst for a larger movement, the next few weeks of the film’s run will provide greater insight on its impact.

One thing going against a possible breakout is the massive amount of competition from other issues for media and public attention, most notably the economy, health care, and a range of foreign policy issues. Even climate change is currently hard pressed to break into the top tier of public agenda issues, suggesting that it might be difficult for food-related problems to warp into celebrity status as a problem of widespread public attention.

Related
Life
Visualization test
Lorem ipsum dolor sit amet, consectetur adipiscing elit. Nullam id tincidunt mi. Morbi malesuada nulla sit amet est hendrerit tincidunt. Etiam viverra, nisl id volutpat eleifend, est augue sodales orci, […]
L&D Strategy
Transfer of learning: The necessary step to make learning stick
Transfer of learning is a concept that should be top-of-mind when planning any learning and development program. Why? In a perfect world, the billions of dollars organizations collectively spend every […]
Starts With A Bang
Why we’ll never see back to the beginning of the Universe
We thought the Big Bang started it all. Then we realized that something else came before, and it erased everything that existed prior.
Thinking
Is there an afterlife? See how your answer compares to polled Americans
There is more consensus on what heaven looks like than hell.
Thinking
How science changes the way we think, according to 10 leading scientists
A group of prominent scientists shares how research has changed them.
Up Next
Guest Thinkers
At Nature Biotech, Science Communication Re-Considered
In this month’s issue of Nature Biotechnology, I join with other authors to suggest several bold new initiatives in science communication and journalism. The Commentary article includes an overview of […]