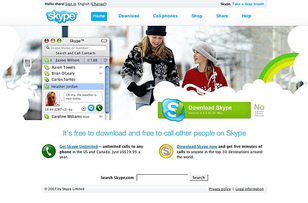 On Monday, Wal-Mart announced plans to sell Skype products (handsets, Webcams, headsets and other equipment) in more than 1,800 of

its stores — proving once again that there are two guaranteed ways for technology companies to make products move off a shelf (1) have it featured on Oprah or (2) sign a deal with Wal-Mart. Wal-Mart will also be the first retailer to sell prepaid calling cards

for the Skype VoIP service (in denominations of $8.80 and $20), a step that could finally bring Skype mainstream acceptance, enabling it to win over the consumer who still confuses the acronyms VIP and VoIP.

Ever since late 2005, eBay has been under intense pressure to leverage its $2.6 billion acquisition of Skype, and obviously ended up deciding that the potential benefits of a Wal-Mart alliance would far outweigh any negative fall-out from doing business with Wal-Mart.

“The deal with Wal-Mart is a huge win for Skype. The company hopes it will help drive usage among the mainstream public. “This

relationship with Wal-Mart will increase exposure for Skype and our

America, said in a statement. “Our research suggests that when users

add a Skype-certified accessory like a headset, handset or Webcam, it

greatly enhances their experience, and they use Skype more to connect

with family, friends and business colleagues.”

From an investment perspective, I’m not sure I understand this, but it looks like at least one Wall Street investment site thinks that the Wal-Mart deal will actually help Vonage, not Skype, in the battle for VoIP dominance.