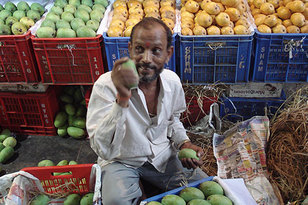 When it comes to design and innovation, the overwhelming consensus amongst practitioners is that “simplicity” is better than “complexity.” When Apple designed the iPod, simplicity of design and operation was a foremost consideration. When retailer Staples came up with its “That was Easy” promotional campaign, it marked a radical departure from its previous “Yeah, we’ve got that” mindset. And when Philips launched its Sense and Simplicity campaign, it was all about making everyday consumer experiences easier and more intuitive. So, from an innovation perspective: Is it ever better to be complex and chaotic rather than simple?

The answer (as you might have guessed from the title) is yes. Yesterday, there was a fascinating page A1 story in the Wall Street Journal, highlighting the efforts of one Indian retailer (Pantaloon Retail) to re-create the confusion, chaos and, yes, grimy mess of the outdoor bazaar within the structure of a big-box supermarket. According to the head of Pantaloon Retail, Indian consumers prefer to shop in dusty, crowded, dirty, clogged markets and he’s trying to foster exactly those kinds of conditions at his Food Bazaar stores around India:

“On a tour of one of his supermarkets, Kishore Biyani

notes that shopping carts are getting stuck in the narrow aisles, wheat

and lentils have spilled onto the floor, black spots cover the onions

and it’s difficult to hear above the constant in-store announcements.

He grins and congratulates the store manager. Mr. Biyani, 45 years old, has built a large business and a family fortune on the simple premise that, in India, chaos sells.

and quiet stores where products are carefully arranged. But when Mr.

years ago, too many customers walked down the wide aisles, past neatly

stocked shelves and out the door without buying.

Mr. Biyani says he soon figured out what he was doing

wrong. Shopping in such a sterile environment didn’t appeal to the

lower middle-class shoppers he was targeting. They were more

comfortable in the tiny, cramped stores — often filled with haggling

customers — that typify Indian shopping. Most Indians buy their fresh

produce from vendors who keep vegetables under burlap sacks.

So Mr. Biyani redesigned his stores to make them

messier, noisier and more cramped. “The shouting, the untidiness, the

chaos is part of the design,” he says, as he surveys his Mumbai store

where he just spent around $50,000 to replace long, wide aisles with

narrow, crooked ones: “Making it chaotic is not easy.”

That’s an interesting takeaway lesson for any Western company thinking about setting up operations in an emerging market. Anyway, as someone who lived for awhile in an emerging market (Russia), I can appreciate the various ways that Western companies “over-shoot” a market when they enter, expecting that the same Western tastes and preferences can be imported into a country, the same way that products are imported. While I found the Wall Street Journal article to be a bit condescending toward Indian consumers, the article does do a great job of explaining the cultural and anthropological obstacles to doing business in India.