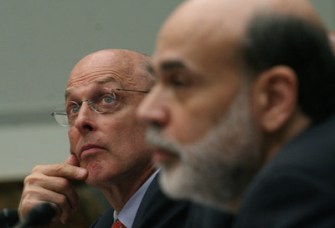 The Dartmouth investment banker and the Princeton professor.

It would be interesting to trace the origin of the term “bailout” as applied to the Bush administration’s plan since the phrase has locked in a specific framing of the issue that inflames populist anger and caters to House Republicans’ efforts to exploit the situation for political gain.

Of course, a “bailout” is not how an economist is likely to view or describe the proposal. An alternative description unlocks a very different perception and understanding. The bailout triggers thoughts rescuing individual wealthy bankers who got greedy. The term “economic surge” on the other hand, would activate thoughts of jump starting an economy that is collectively a stuttering engine.

From an article at this morning’s Politico.com:


The cost debate illustrates just how nuanced the massive intervention will be. Paulson has often stumbled this week when trying to describe its intent, and the clearest voice has been Bernanke, a former college professor who casts the whole effort as an unprecedented experiment in “price discovery” that will add not just capital but also precious knowledge to jump-start the credit markets.

With the bursting of the U.S. housing bubble, mortgage-related securities are caught in a vicious downward cycle, commanding only “fire sale” prices, Bernanke says. The government purchases, through a series of novel auction mechanisms, will help the market value these assets, he says. And this could be the spark needed to get markets working and the economy’s engine turning over again.

This explanation is very different from the “bailout” imagery that surrounds the debate. And the great challenge for both sides has been to find some path in between these two poles — able to satisfy the anger voters feel toward Wall Street but also leaving enough room for Bernanke’s experiment to function.

Related
Life
Visualization test
Lorem ipsum dolor sit amet, consectetur adipiscing elit. Nullam id tincidunt mi. Morbi malesuada nulla sit amet est hendrerit tincidunt. Etiam viverra, nisl id volutpat eleifend, est augue sodales orci, […]
L&D Strategy
Transfer of learning: The necessary step to make learning stick
Transfer of learning is a concept that should be top-of-mind when planning any learning and development program. Why? In a perfect world, the billions of dollars organizations collectively spend every […]
Starts With A Bang
Why we’ll never see back to the beginning of the Universe
We thought the Big Bang started it all. Then we realized that something else came before, and it erased everything that existed prior.
Thinking
Is there an afterlife? See how your answer compares to polled Americans
There is more consensus on what heaven looks like than hell.
Thinking
How science changes the way we think, according to 10 leading scientists
A group of prominent scientists shares how research has changed them.
Up Next
Guest Thinkers
Do Roughly 40% of Americans Agree with Palin on Abortion?
While many Democrats and women find Palin’s support for criminalizing abortion to be outrageous, a recent survey by the Pew organization finds that roughly 40% of Americans generally agree with […]