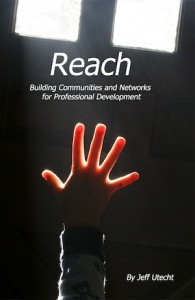 is offering a free copy of his new book, Reach, until Friday, June 18. After then you can purchase a PDF or paper copy at a very affordable price (which is what I did because I want to encourage him to do more of this!).

You also should check out Jeff’s free e-books: Blogs as Web-Based Portfolios and Planning for 21st Century Technologies in Schools.

Jeff’s new book campaign illustrates that the Web makes it easy for us to share resources and gain visibility for our efforts. This is a wonderful (and previously unimaginable) thing. As Seth Godin notes:

[and e-books are a great way to do this]

Is your school organization teaching its students to be EMPOWERED (not just safe, responsible, and appropriate) users of our new information landscape? Or is it still pretending that being findable on the Web – as an individual / company / agency / charity / NGO / etc. – is less important than, say, mastering those soon-to-be-forgotten fact nuggets?

Tools for school – Digital document annotation on an iPad, iPod Touch, or laptop

This post addresses document annotation on the iPad, iPod Touch, and laptops for educators (and others). The Kindle App, Evernote, iAnnotate PDF app, and Pogo Sketch Stylus are featured.