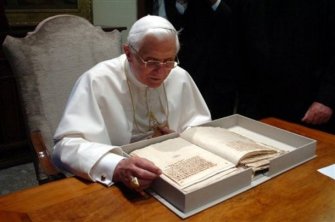 In announcements and press efforts this past month, the Vatican is promoting Galileo as a symbol of collaboration between science and religion. The initiative is part of a larger campaign by the Vatican to repair the Pope’s image on matters of science and to promote dialogue on the relationship between reason and faith.

Overall, the Vatican’s efforts should be welcomed. In a media environment that chronically pits science and faith against each other, we need powerful cultural symbols that counter the conflict narrative and that can serve as conversation starters rather than generating finger-in-the-eye insults and attacks.

There’s just one problem: It’s going to be difficult to switch Galileo from being a centuries old symbol of conflict to one of accommodation and co-existence. So while the Vatican might have the right strategy in mind in promoting dialogue between science and faith, they might be choosing the wrong figure and symbol to push.

As I’ve written, the larger strategic need for collaboration around shared common values and goals is something that scientists such as EO Wilson has recognized and that Carl Sagan emphasizedlater in his career.

From an Associated Press article:


At a Vatican conference last month entitled “Science 400 Years after Galileo Galilei,” the Vatican’s No. 2 leader, Cardinal Tarcisio Bertone, said Galileo was an astronomer, but one who “lovingly cultivated his faith and his profound religious conviction.”

“Galileo Galilei was a man of faith who saw nature as a book authored by God,” Bertone said.

The head of the Vatican’s Pontifical Council for Culture, which co-sponsored the conference, went further. Archbishop Gianfranco Ravasi told Vatican Radio that Galileo “could become for some the ideal patron for a dialogue between science and faith.”

He said Galileo’s writings offered a “path” to explore how faith and reason were not incompatible.

The Rev. John Padberg, a church historian and the director of the Institute of Jesuit Sources at St. Louis University, said he suspected the Vatican’s new emphasis on Galileo’s faith came from the pope himself.

“Pope Benedict XVI is ardently convinced of the congruence of faith and reason, and he is concerned, especially in the present circumstances, of giving reason its due place in the whole scheme of things,” he said.

While it is widely accepted that Galileo was a convinced Catholic, Padberg questioned whether he could ever be accepted as some kind of a poster child for the faith and reason debate. “That’s going to be a long shot for an awful lot of people, on both sides, by the way,” he said.

Benedict, a theologian, has made exploring the faith-reason relationship a key aspect of his papacy, and has directed his daily newspaper, L’Osservatore Romano, to take up the charge.

Related
Life
Visualization test
Lorem ipsum dolor sit amet, consectetur adipiscing elit. Nullam id tincidunt mi. Morbi malesuada nulla sit amet est hendrerit tincidunt. Etiam viverra, nisl id volutpat eleifend, est augue sodales orci, […]
L&D Strategy
Transfer of learning: The necessary step to make learning stick
Transfer of learning is a concept that should be top-of-mind when planning any learning and development program. Why? In a perfect world, the billions of dollars organizations collectively spend every […]
Starts With A Bang
Why we’ll never see back to the beginning of the Universe
We thought the Big Bang started it all. Then we realized that something else came before, and it erased everything that existed prior.
Thinking
Is there an afterlife? See how your answer compares to polled Americans
There is more consensus on what heaven looks like than hell.
Thinking
How science changes the way we think, according to 10 leading scientists
A group of prominent scientists shares how research has changed them.
Up Next
Guest Thinkers
More Details on NSF “Reporting Climate Change” Panel
From an email sent out this morning by NSF. If readers can make it, this panel is definitely worth attending.NSF to Host Panel Discussion on Communicating Climate ChangeJournalists Andy Revkin […]