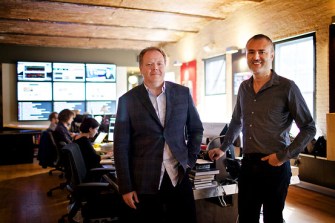 When the smartest guy (or gal) in an industry decides to throw in the towel on a business model, it’s time to stand up and take notice. This week, the ever-controversial Nick Denton of Gawker Media – the most successful and well-known of all the blog networks that exploded in popularity over the past decade, declared to the Wall Street Journal, “I don’t want to be the No. 1 blog network anymore. That’s like being king of the playground.”

At which point, the Wall Street Journal diligently rushed out and collected quotes from all kinds of social media insiders that compared the art of blogging to the ancient art of calligraphy. Denton pointed out that the nine key blogs comprising the Gawker Media empire would take on a radically new look and appearance in 2011 in an effort to maximize eyeballs and advertising revenue:

(2) One big “persistent” story per page, rather than a chronological updating of new content as it becomes available (in other words, say goodbye to one of the fundamentals of blogging. See-ya!)

These three major changes, of course, will impact the future of content as we know it on the Web:

“The coming face-lift, which is being tested publicly, is likely to attract the attention of a variety of bloggers and media organizations that have long admired Mr. Denton’s technology instincts. Since the launch of the first Gawker site, Gizmodo, in 2002, a number have copied such features as his tools for comments and his elaborate back-end analytics system, which, in the new design, helps power a live visitor counter at the top of each site. […] “He has been pushing this envelope in terms of using technology,” said Om Malik, who has been blogging about technology on Gigaom.com since 2001. He has a talent for “nudging [users] along towards a new usage behavior.”

What’s fascinating is that within the WSJ feature piece, Denton likens the new Gawker format to a “newsmagazine.” WTF? We went through a decade of rapid technological and content change, destroyed and left for dead scores of the most prestigious magazines and newspapers in the world, transformed the profession of “journalist” into something akin to a “social worker,” and lopped off billions of dollars of market value of the world’s largest media organizations… and we’re back to the concept of a newsmagazine?
UPDATE: Ha! I just noticed that my calligraphy provider has a new option for me that I can toggle on and off when adding a blog post — “keep this post at the top of your blog’s home page.”
[image (in lieu of video) via Wall Street Journal]
Related
Health