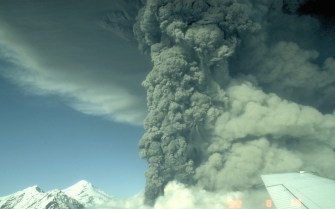 If Alaska wants to take a cue from Iceland, it might find itself with more power than it can use. That is, if the dreams of the Alaska Division of Oil and Gas come true. They are planning to lease land on Mt. Spurr and possibly Mt. Augustine for geothermal exploration. Both of these volcanoes are active, with Mt. Spurr erupting last in 1992 (famously almost taking out a KLM 747 due to volcanic ashEDIT: Oops, this was not Spurr in 1992, but Redoubt in 1989. Luckily, AVO knew to warn aviation about the Spurr eruption thanks to the lessons learned from the near disaster at Redoubt) and Augustine erupting as recently as 2006. Now, I am all for the development of geothermal energy and Alaska definitely has a lot of potential for geothermal development thanks to its abundant volcanoes along the Aleutian Islands and Cook Inlet. Now, whether I’d chose volcanoes that are (a) active and (b) potentially violent/explosive in their eruptive style is more questionable. These could be interesting cases to follow to see how we can balance the potential boon that is geothermal energy from volcanoes with the volcanic hazards posed by them – the last thing we need is to put more people in harms’ way.

Edited 6/25 to fix reference to the KLM flight incident.