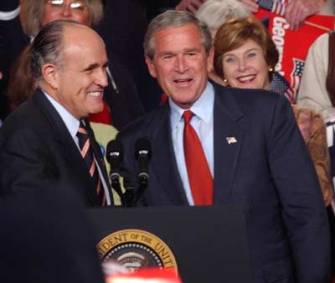 In the 2004 election, the great majority of voters didn’t deliberate the specific policy positions of the candidates and then make an informed choice. Instead, in order to make up their minds, the miserly public relied heavily on “low information signals” such as likability and perceived character.

In their analysis of the election, James Carville and Paul Begala conclude that the Bush team correctly realized that a few themes could frame the election in their favor. The central themes went something like this:

If he doesn’t live your life, share your values, or is someone you would want to have a beer with, then he shouldn’t be your President.

The point I make in our Speaking Science 2.0 tour is that relative to complex and controversial science topics such as climate change, the public engages in a similar form of low information rationality, relying heavily on their ideology and partisanship in combination with just those images most readily available in the media. The implication is that when it comes to public communication about science, there is nothing essentially unique from other areas of politics.

As the 2008 election nears, a similar low information calculus will be applied to the roster of presidential candidates. Gallup picks up on this in a survey released today. Gallup asked the public in an open ended question:

Next, suppose Rudy Giuliani is elected president in 2008. In your view, what would be the best or most positive thing about a Rudy Giuliani presidency? [Anything else?]

Paul Kurtz on What’s Missing from The New Atheism

The philosopher Paul Kurtz has published a new position booklet that addresses much of what I have been arguing is missing–and so deeply troubling–about the New Atheist movement. Below is […]