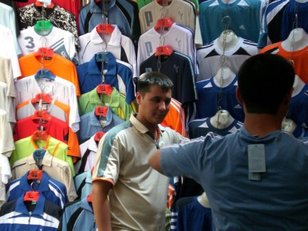 Several weeks ago, I posted about Kiva – a revolutionary new finance site that enables citizens from all over the world to make micro-loans to entrepreneurs in emerging markets. My first experience of lending money to a pomegranate farmer in Azerbaijan was so successful that I’ve decided to make another micro-loan through Kiva – this time to a sportswear retailer who sells his products in an open-air market in Tajikistan. Gafurjon Salimov of Khujand, Tajikistan has been in business for 7 years and needs $850 to build a roof for his stall in the market so that he can hang his goods in rainy and snowy weather. With the Thanksgiving holiday upon us here in the U.S., what better way of giving thanks than to make a loan for a worthwhile cause via Kiva?