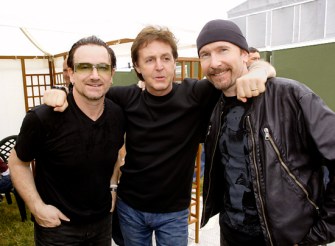 A series of concerts “bigger than Live Aid” are being planned for July, in a bid to put the subject of climate change before a global audience of two billion, reports the Financial Times. The event, scheduled for July 7, will feature co-ordinated film, music and television events in seven cities including London, Washington DC, Shanghai, Rio de Janeiro, Cape Town and Kyoto, with major broadcasters and media owners aiming to magnify public concern over global warming. Al Gore is reported to be a chief organizer.


Given the major challenges that even major moments like the release of the IPCC report face in breaking onto the news and public agenda, these “entertainment education” events in the form of blockbuster movies, multi-media celebrity initiatives like Global Cool, and “Live 8” style concerts are a necessary and very likely effective alternative strategy.

According to the Financial Times, they are promising a line-up of artists to “dwarf” that of the Live8 and Live Aid concerts, thought to be branded under the name “SOS.” One person close to the event said yesterday: “The talent involved is just exponentially bigger because the issue itself is bigger. Live Aid was about asking people to stump up money, this is about effecting systemic change. The aim is not just to drive awareness but to get people to take action.”

There’s just one problem. As great a catalyst and leader as Al Gore has been on global warming, and as much as I admire Inconvenient Truth, he remains a major “negative brand” for the nearly half of Americans who hold an unfavorable view of the former VP. It’s one reason why I’ve argued in the past that Gore’s film should stay out of science classes. With this summer’s world concerts, his prominent involvement will be just another convenient filtering device for Republicans