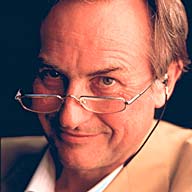 For his documentary Root of All Evil?, Richard Dawkins was granted inside access to Ted Haggard’s Colorado Springs mega-church, and he sits down for an interview with Haggard. “This place strains belief. It isn’t just a church, but an organized social network,” comments Dawkins upon walking into the basketball arena-sized temple.

See the 8 minute clip at YouTube. Not surprisingly, Haggard accuses Dawkins of “intellectual arrogance,” but manages to keep his cool after Dawkins compares his church service to a Nuremberg Nazi rally. Only later does Haggard pull up in his pick-up truck and boot Dawkins and his film crew off the property, accusing them of calling his church-goers animals. Dawkins claims he was only discussing evolution, and that all humans are animals.