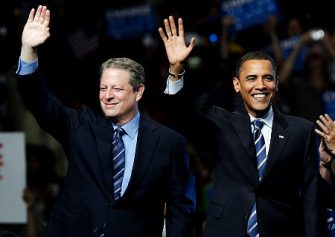 One image of Gore: A partisan activist and leader.

CNN reports this afternoon that Al Gore will have a major speaking slot at the Democratic convention, joining Obama on stage the last night of the convention in front of a stadium crowd of 70,000.

I am a big fan of Al Gore and often think about how history and this country would be different if Gore had run a more competent presidential campaign in 2000. Yet I can’t also help but observe the strong partisan message that Gore continues to indirectly send on climate change.

Various poll analyses reveal that despite Al Gore’s Nobel prize winning Inconvenient Truth campaign and a record spike in mainstream news attention, a deep partisan divide remains on the topic, with a majority of Republicans continuing to dispute the validity of the science and the urgency of the matter, while also believing that the media has greatly exaggerated the problem.

Gore has been a great champion for action on climate change, yet if he is going to make the issue his life’s work he needs to leave behind overtly partisan political appearances and speeches. As long as Gore continues to be both the lead spokesperson on climate change and also a major Democratic activist, it is all too easy for the miserly public to continue to reach judgments about climate change relying almost exclusively on their perceptual lens of ideology. 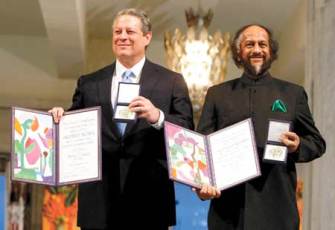 The other image of Gore: Climate change advocate appearing with IPCC scientists to accept joint Nobel Peace Prize, which conservatives then derided as “the Kentucky Derby of the world left.”

Related
Life
Visualization test
Lorem ipsum dolor sit amet, consectetur adipiscing elit. Nullam id tincidunt mi. Morbi malesuada nulla sit amet est hendrerit tincidunt. Etiam viverra, nisl id volutpat eleifend, est augue sodales orci, […]
L&D Strategy
Transfer of learning: The necessary step to make learning stick
Transfer of learning is a concept that should be top-of-mind when planning any learning and development program. Why? In a perfect world, the billions of dollars organizations collectively spend every […]
Starts With A Bang
Why we’ll never see back to the beginning of the Universe
We thought the Big Bang started it all. Then we realized that something else came before, and it erased everything that existed prior.
Thinking
Is there an afterlife? See how your answer compares to polled Americans
There is more consensus on what heaven looks like than hell.
Thinking
How science changes the way we think, according to 10 leading scientists
A group of prominent scientists shares how research has changed them.
Up Next
Guest Thinkers
Gore’s “A Path to Survival” Available June 9, 2009
In case you were wondering, Gore’s much anticipated follow up book–where he is scheduled to detail his proposed policy actions–is due out about five months into the next administration.