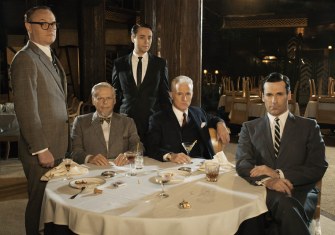 storyline of television series, even award-winning ones,” H. James Wilson of the Harvard Business Review explains why one scene in particular from Mad Menoffers a vital lesson for innovators. In short, “bosses shouldn’t hesitate to openly reward the execution of a solid

idea.” HBR references a scene from Season Two in which Peggy Olson comes up with an idea for a new Popsicle campaign and aggressively markets the idea with her bosses at ad agency Sterling Cooper:

“I was reminded of an episode from season two

after reviewing fresh research results. In the episode, fast-rising

hallway, reminding him that she “landed the Popsicle account on her

on colleagues, and successfully pitching it to Popsicle executives. As

compensation, Olson asks Sterling for her own office. “It’s yours,” replies her boss decisively.”

Giving Peggy her own office, it turns out, was the right move. According to the Babson Executive Education survey of 194 front-line employees on

trends and practices in corporate innovation, there is a striking

correlation between higher performance and overt leadership rewards for

These findings were duplicated across three innovation practices: personal idea

creation, experimentation, and scaling ideas. For example, respondents working at “rewarders” are two and a half times more likely to personally develop new ideas on a regular basis than those working at non-rewarders (55% to 21%).

Now, if you’ll excuse me, it’s almost time for the premiere of Season Four of Mad Men — time to put on a suit, tie and fedora and head out for an Old Fashioned or four with Don Draper, Roger Sterling, Pete Campbell, and the other Mad Men.