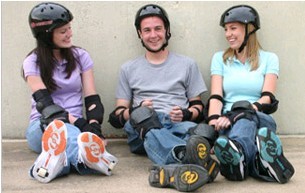 One of the hottest IPOs of 2006 was Heelys, the company that started a nationwide fad of skating around in shoes with wheels in them. (If you have the misfortune of living near a suburban mall, you can’t help but notice little tykes whizzing past you every few minutes on their Heelys). Anyway, how did this fad start and who’s responsible for it? As Startup Journal explains, Heelys is one of those legendary garage start-ups launched by a quirky visionary with a real passion for tinkering:

“Many amateur inventors dream of creating a million-dollar

product in the garage, but usually the only thing that ever comes out of that

garage is the family car. Roger Adams, the creator of a new kind of skate-shoe,

on the boardwalk, thinking back to a “happier, simpler time” at his family’s

roller rink. That led him to an idea. “It occurred to me that all those things

— roller skates, skateboards, bikes — had been around for a hundred years,” he

says. “It seemed to me that there had to be some new way to have fun on wheels.”

His friend had a workshop in his garage. He heated up a butter

balls and wheels. He “cannibalized at least four pairs” of sneakers in the first

few hours. He tried them repeatedly and kept falling until he accidentally

“I had a concept. I wanted the wearer to be able to walk

normally and then roll,” he says. “There is a stealth nature to Heelys. When you

see a kid wearing them, you wouldn’t know there’s a wheel in the sneaker until

they started to roll.”