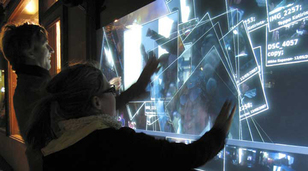 “Most city centers have booths or offices where you can get information on local events. In Helsinki, they’ve gone one better by creating an interactive City Wall; a touch screen where people can find and play with information and can also send in images for others to see.”

According to Influx Insights, Helsinki’s CityWall is “a glimpse of the future of civic information design and signage… Thisnis the type of screen we will soon be seeing in our airports, trainnstations and city centers. It will transform information that’snhistorically been one dimensional, static and often out of date into anresponsive, interactive and collaborative nervous system.”