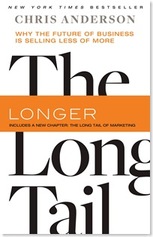 Even before the publication of his breakthrough book The Long Tail: Why the Future of Business is Selling Less of More, Chris Anderson has consistently used his Long Tail blog as a way to generate conversation around the themes found in the book and point out interesting new examples that he has uncovered in the business world. To his credit, Chris has been unafraid to take on his critics and understand their points of view in order to better fine-tune his own arguments. Now comes perhaps the biggest challenge – a Harvard Business School associate professor who apparently worked with Chris on some of the original research for the Long Tail book has just published a controversial, detailed and well-researched article in the Harvard Business Review deconstructing the Long Tail argument.

To his credit, Chris has fully linked to the article and point-by-point, examined the arguments contained within the HBR article. A fascinating read overall, especially if you’re interested in seeing the give-and-take between two talented thinkers.

While you’re at it, check out the new paperback version of The Long Tail, now available for pre-order on Amazon.