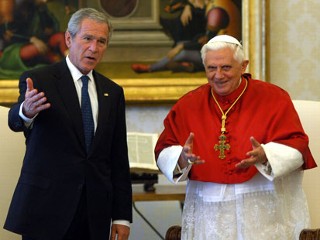 The Pope is technically a head of state, so when he visits the US, why doesn’t the news media spend more time asking him hard hitting questions about church policy and practice?

NPR’s On the Media spotlighted that question last week (audio above) interviewing Tom Roberts, news director of The National Catholic Reporter. Here’s the crux of the problem as Roberts sees it.

TOM ROBERTS: They’re dealing with a basically secret organization. It makes its decisions in secret, its appointments in secret. There’s no precedent for a real robust exchange. You don’t even have that with bishops in the United States.

Very often – more often than not, I would say – they choose the turf, they choose [LAUGHS] the circumstance and they choose the questions. It’s rare that they would put themselves out for an all-out, no-holds-barred news conference. So it’s a tough assignment, especially when these events become the point of coverage.

Back in February, I traveled to Rome, Italy to present at a conference sponsored by Columbia University’s Earth Institute and the Adriano Olivetti Foundation. The focus was on climate change […]