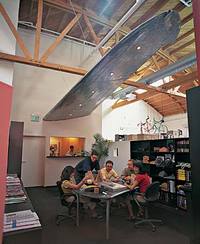 Over at the Architectural Record, there’s a fascinating article on how to create an innovative “studio culture” within any firm. The results may surprise you — to some extent, the very strategies for encouraging innovation within a firm would seem to be the very strategies that could sink the firm: “Hire naive misfits who argue with you; encourage failure; avoid letting

In fact, “failure” seems to be a dominant theme with just about every business guru interviewed for the article. At Palo Alto-based innovation and design firm IDEO, there is a simple mantra: “Fail often in order to succeed sooner.” Often, the best employees turn out to be the people who might not have been hired in the first place: “Fresh perspectives derive from mavericks with wildly diverse

backgrounds and no preconceptions who challenge the status quo,

champion their own ideas, and illuminate the metaphorical darkness…”