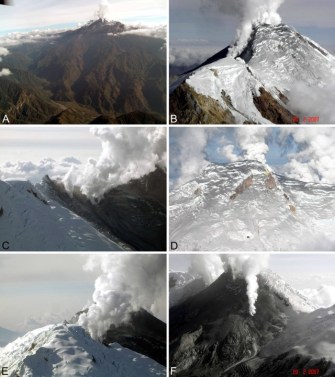 Nevado del Huila in Colombia continues to keep officials in the southeast region of the country on their toes as they wait to see what the volcano might do. There was increased seismicity over the weekend according to Jair Cardoso of the Attention, Prevention and Disasters Committee, along with minor steam and ash emissions. The Colombian geological survey, INGEOMINAS, will be sending experts (including Marta Calvache and Cesar Eduardo Lopez) to examine the current state of the volcano and try to decipher what state the magmatic system is in: ready to erupt or just gurgling away.

(Of note, in this article is the fact that I’m not 100% convinced that the accompanying picture is, in fact, Huila. Can anyone confirm this?)