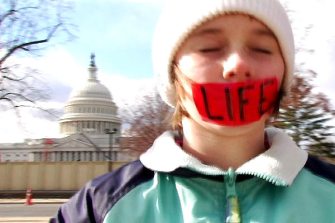 Email list servs and blogs aren’t the only things buzzing about the new documentary ‘Jesus Camp,’ (trailer) which opens in major cities this weekend, including here in D.C. The news media has also discovered the film, and its impact has been to generate a string of news reports that focus on a very specific framing of the Evangelical movement. In this case, ‘Jesus Camp’ serves a function that I have talked about with other documentaries: It elevates attention to a specific social or political issue in the news, but at the same time, interjects a selective framing of the topic.

News media attention to the rise of the Evangelical movement is not new, what’s different about the coverage linked to the release of ‘Jesus Camp’ is that this week journalists are focusing heavily on claims that the movement is being used as an indoctrination tool to socialize kids into an authoritarian worldview, a view that is intolerant of other religions, and that worships the Republican party. (For examples, see this ABC News clip, and this Good Morning America interview.)

The film’s focus on a “camp” for kids that promotes a strict fundamentalist dogma immediately draws comparisons to radical Islam, and that interpretation, even if unspoken, shines through in news coverage. As an agenda-setter and frame-setter, ‘Jesus Camp’ provides a news peg for journalists to explore this troubling side of Christian evangelicalism, while still maintaining the appearance of objectivity. In other words, if charged with bias, journalists can say: “We didn’t create this story, we are simply reporting on the content and claims of this new film.’