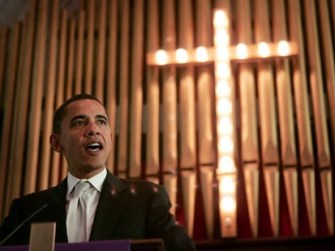 The irony of the 2008 presidential race is that this time around, the Democratic nominee is by far the more religiously devout candidate, promoting a born again language and professed faith. In a match up with John McCain, it’s Barack Obama who can genuinely speak the language of evangelicals, softening some of the Democratic party’s “God problem.”

Indeed, news reports are speculating that many young Evangelical voters might break for Obama in the general election, a proposition that fits with some of the recent polling data that I have spotlighted at this blog.

The Obama campaign is already actively targeting Evangelicals, priming born again voters with an emphasis on the Senator’s commitment to Christ. Consider this flyer distributed at churches in Kentucky quoting Obama as asserting: “My faith teaches me that I can sit in church and pray all that I want but I won’t be fulfilling God’s will unless I go out and do the Lord’s work.”

I know the conservative policy purists will say that Obama is liberal and therefore Evangelicals won’t buy his “Evangelical speak”. Not so fast. Remember, many people vote based on an emotional connection to a candidate or if they can relate to that person. Obama may need to work on this perception that he is “elite” but when he talks about Jesus and the Bible and the fact that he’s a sinner, it makes him more real and in the process, more electable too.

Related
Life
Visualization test
Lorem ipsum dolor sit amet, consectetur adipiscing elit. Nullam id tincidunt mi. Morbi malesuada nulla sit amet est hendrerit tincidunt. Etiam viverra, nisl id volutpat eleifend, est augue sodales orci, […]
L&D Strategy
Transfer of learning: The necessary step to make learning stick
Transfer of learning is a concept that should be top-of-mind when planning any learning and development program. Why? In a perfect world, the billions of dollars organizations collectively spend every […]
Starts With A Bang
Why we’ll never see back to the beginning of the Universe
We thought the Big Bang started it all. Then we realized that something else came before, and it erased everything that existed prior.
Thinking
Is there an afterlife? See how your answer compares to polled Americans
There is more consensus on what heaven looks like than hell.
Thinking
How science changes the way we think, according to 10 leading scientists
A group of prominent scientists shares how research has changed them.
Up Next
Guest Thinkers
Francisco Ayala on the Confusing New Atheist Message
As I wrote yesterday, one of the emotional strategies employed in Expelled is to paint atheist pundits as the stand-ins for “big science,” in the process selectively avoiding interviews with […]