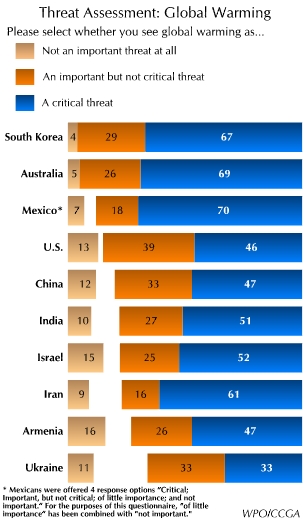 As Earth Day approaches, expect a number of major polling reports on American views of global warming. I recently had a study accepted at Public Opinion Quarterly that analyzes twenty years of available polling trends on global warming, and I will be updating the analysis in the next two weeks as these most recent surveys come out. I was interested in doing the study because, despite the availability of dozens of survey studies over the past two decades, no authoritative summary of their collective findings exists. As a consequence, survey results often become an ideological Rorschach Test, with one side in the policy debate citing polls as reflective of a public demanding action on global warming, while the other side claiming that polls reveal an American citizenry unwilling to bear the economic costs of cutting greenhouse gas emissions. In the study, I wanted to try to arrive at some answers as to where the American public stands on the scientific and political dimensions of the issue, while also trying to understand how U.S. views have changed over time. Stay tuned for more details on this forthcoming study.

Speaking of new survey data, released today is the latest in a series of cross-national comparisons conducted by the Chicago Council on Foreign Relations. The countries captured in this latest survey include the U.S., Australia, China, India Israel, and several developing countries. Western European countries, where there is very strong public support for action on climate change, are not included in the poll.

As the Washington Post observes (and I concur), of noticeable interest is that a strong majority of Iranians (61%), along with a majority of citizens in several other developing countries, consider climate change to be a “critical threat” compared to only 46% of Americans.

Related
Life
Visualization test
Lorem ipsum dolor sit amet, consectetur adipiscing elit. Nullam id tincidunt mi. Morbi malesuada nulla sit amet est hendrerit tincidunt. Etiam viverra, nisl id volutpat eleifend, est augue sodales orci, […]
L&D Strategy
Transfer of learning: The necessary step to make learning stick
Transfer of learning is a concept that should be top-of-mind when planning any learning and development program. Why? In a perfect world, the billions of dollars organizations collectively spend every […]
Starts With A Bang
Why we’ll never see back to the beginning of the Universe
We thought the Big Bang started it all. Then we realized that something else came before, and it erased everything that existed prior.
Thinking
Is there an afterlife? See how your answer compares to polled Americans
There is more consensus on what heaven looks like than hell.
Thinking
How science changes the way we think, according to 10 leading scientists
A group of prominent scientists shares how research has changed them.
Up Next
Guest Thinkers
Framing Conflict: A New Blog to Watch
Update your RSS feeds, there’s a major new blog on the scene that is worth reading. Framing Conflict was launched a few months back, with a focus on the media’s […]