Joe Bower asked if showing teachers how to make self-graded quizzes for students using Google Docs had any value. Specifically, he said:

When technology is used to accelerate the worst forms of pedagogy, we should all cringe, turn and run away.

And those who endorse this crap should be ashamed of themselves… 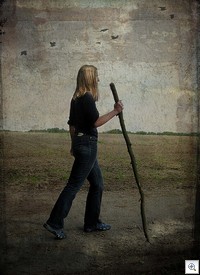 we usually have to give people the time and space to transition from old practices to new. This usually means that new uses of technology look very much at the beginning like old educational practices but with a few more bells and whistles – what Bernajean Porter likely would call ‘Adapting Uses’ rather than ‘Transforming Uses’ [see http://bit.ly/porterspectrum].

So do the examples you show transform educational practice – or move us to better practice? No, probably not. But they may be a necessary first step toward something better? (and may make teachers more efficient, freeing up some time for them along the way)

When I’m invited to speak somewhere, I tell educators that I see (at least) two big transitions ahead of us. First, there is a tremendous need for us to move more of students’ day-to-day work up the cognitive ladder so that it more often encompasses higher-level thinking skills. Second, we need to recognize that we no longer live in an analog, notebook paper world and that schools should be pulling these digital technologies – which are radically transforming every other information-oriented societal segment – into our learning-teaching processes in ways that are authentic, meaningful, and (hopefully) powerful.

These transitions will be heroic journeys – epic changes – rather than ‘snap your fingers and they happen’ events. But what do we do while we’re making these transitions?

If teachers are engaging in instructional behaviors that we might consider less desirable, does showing them how to do those more efficiently with technology help them transition out of those practices or reinforce the status quo? Does introducing the technology tools potentially open the door to better practice or does it simply further solidify current practice? Do we hook technology onto what they already know and do – even if it’s not the greatest pedagogy – with the end goal of getting to a different place, or do we reject those practices and advocate immediately for something new and different?

How much math do you really need in everyday life?

G. V. Ramanathan, emeritus professor of mathematics, statistics, and computer science, asks in the Washington Post: How much math do you really need in everyday life? Ask yourself that — […]