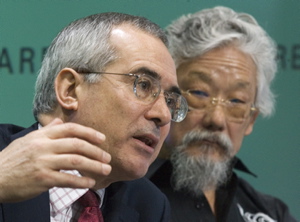 Where have you heard this one before? Back in September, Canada’s Environment Minister John Baird echoed the predictions of a university economist when he claimed that if Canada were to meet its’s 2008-12 Kyoto targets, it would require “a rate of emissions decline unmatched by any modern nation in the history of the world except those who have suffered economic collapse, such as Russia. Canadians do not want empty promises on a plan that we cannot achieve and they do not want our country to face economic collapse.”


This kind of “economic ruin” and “unfair burden” frame has long been used by conservatives in the U.S. to oppose action on climate change, and now it appears embedded in the rhetoric of Canada’s conservative government leaders. Yesterday, in Toronto, however, Canadians were offered a different kind of “dollars and sense” interpretation.

Joined at a sold-out luncheon speech by David Suzuki and Liberal Leader Stéphane Dion, former World Bank chief economist Sir Nicholas Stern turned the economic frame 180 degrees, warning that inaction on climate change would be far more costly and far more disastrious than major policy shifts.
nHaving the former chief economist at the World Bank countering the claims of political officials and university professors can make for a powerful message. Indeed, with the success of books like Freakonomics, the lionization of Alan Greenspan, and the bidding wars for star university professors, economists are the new physicists: they have “special” powers and insights that others don’t. In other words, their predictions carry a lot of cultural authority.

Here’s what the Globe & Mail had to report:

Sir Nicholas says climate change needs to be dealt with to preserve current living standards and safeguard economies. He says global warming, if not confronted, will grow worse and cause costly disruptions, such as inundating coastal cities and environmental refuges in countries that will no longer be habitable.

“It’s very clear to me now that we can be green and grow,” he told reporters outside the Toronto Stock Exchange, where he held a joint news conference with Dr. Suzuki.

“I don’t think it’s a horse race between growth and being responsible on climate change. Good policy can give us both,” Sir Nicholas said. “Eventually, if we ignore the problem of climate change, it’s growth and living standards that will suffer.”

In his presentation, Sir Nicholas said it will cost about 1 per cent of GDP, or economic output, to deal with climate change, which, at worst, could reduce the economy by 20 per cent. “The costs of inaction are far greater than the costs of action,” he says.

He thinks countries can reduce their emissions through such steps as carbon taxes, capping releases for industries, and requiring devices such as appliances to be more energy efficient.

“I think most of us in the area are not economists. We can’t speak with anything like the credibility that Sir Nicholas has,” he said.

Related
Life
Visualization test
Lorem ipsum dolor sit amet, consectetur adipiscing elit. Nullam id tincidunt mi. Morbi malesuada nulla sit amet est hendrerit tincidunt. Etiam viverra, nisl id volutpat eleifend, est augue sodales orci, […]
L&D Strategy
Transfer of learning: The necessary step to make learning stick
Transfer of learning is a concept that should be top-of-mind when planning any learning and development program. Why? In a perfect world, the billions of dollars organizations collectively spend every […]
Starts With A Bang
Why we’ll never see back to the beginning of the Universe
We thought the Big Bang started it all. Then we realized that something else came before, and it erased everything that existed prior.
Thinking
Is there an afterlife? See how your answer compares to polled Americans
There is more consensus on what heaven looks like than hell.
Thinking
How science changes the way we think, according to 10 leading scientists
A group of prominent scientists shares how research has changed them.
Up Next
Guest Thinkers
Drudge Plays Games with DC Weather and Climate Change
Irony can be an effective persuasion tool. As pictured on the Drudge Report this morning with the headline: HEARING ON ‘WARMING OF PLANET’ CANCELED BECAUSE OF ICE STORM. The headline […]