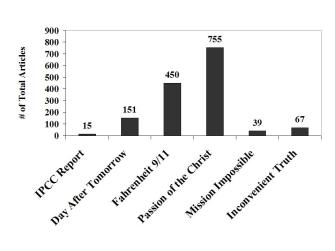 In 2004 when The Day After Tomorrow hit theaters, I wrote this column evaluating its possible impacts. Later, Anthony Leiserowitz followed with a study appearing in Environment magazine assessing the public and media impact of the film.

As other studies have shown with films such as Fahrenheit 9/11, and Passion of the Christ, there is a strong self-selection influence, with like-minded citizens attending the film, and coming away with their beliefs reinforced. So, for example, in the case of the Passion of the Christ, the already strongly religious attended the film, and came away with their Christian beliefs and identity strengthened. The film had a reinforcement rather than conversion impact. Very few non-religious viewers attended the film. The same for Fahrenheit 9/11, very few Republicans attended the film, instead it reached an already polarized group of Democrats and liberals.

BUT OUTSIDE OF THE DIRECT EFFECTS of these movies, the films serve an important agenda-setting and frame-setting function in news coverage, elevating attention to the topic beyond any “real world” events related to science or policy. The films also introduce selective interpretations or frames of the issue into coverage that might otherwise not have been emphasized.

(Note: Following the method in the Environment study, the search included “Al Gore” and “Inconvenient Truth” or “global warming” appearing in the headline or lead paragraph of articles at The New York Times, Los Angeles Times, USA Today, Washington Post, Chicago Sun-Times, Denver Post, Boston Globe, or the San Diego Star Tribune for the two month period leading up to the NY/LA release of the film and the weeks since its opening. The search words for Mission Impossible were “Tom Cruise” and “Mission Impossible.”)

While its still early, Inconvenient Truth falls short of Day After Tomorrow as a media agenda-setter, though it already beats substantially the attention generated by the IPCC report. Inconvenient Truth has also been a more successful media topic than Mission Impossible III. It is likely that as the documentary opens in national release over the next few weeks, even more media attention will follow.

But just as importantly, besides helping to elevate attention to the topic of global warming in the news, the documentary via news coverage reaches indirectly members of the public with selective interpretations of the issue. Many of these citizens may never decide to go to see Inconvenient Truth. Indeed, it will be interesting to look at the survey data taken on the topic, but I suspect based on past political documentaries, that the audience for the film will be weighted towards Democrats and citizens with higher levels of concern over global warming generally. How many Republicans and conservatives are likely to go see the film remains in question.

Yet Gore in his media blitz is successfully re-framing global warming away from a debate over scientific uncertainty or negative economic impacts, and in the direction of moral consequences and economic innovation. Indeed, these interpretations are likely to ring persuasive with many members of the public unlikely to go to the theaters to actually see the movie. Here are the two main frames (and catch phrases) that Gore uses:

B) Referencing the Chinese characters for “Crisis,” he says that every crisis represents both danger but also opportunity. In this case, the opportunity is to re-invent the economy in innovative ways that would make the U.S. an international leader in new technologies to cope with global warming. This shift in economic development is emphasized as central to the international competitiveness of the country.

C) Of course, the film also hopes to lend a sense of urgency by using a more traditional framing of the issue currently en vogue among environmental groups and news organizations (see the recent Time magazine cover story.) In this case, the method is a visual dramatization of the possible impacts of climate change related to sea level rise and hurricanes.

Overall, given the strong self-selection trends for politically-oriented movies, these indirect media effects on the public by way of increased attention to global warming and by way of the introduction of new frames to the debate will be the most important impact for Inconvenient Truth.

Related
Life
Visualization test
Lorem ipsum dolor sit amet, consectetur adipiscing elit. Nullam id tincidunt mi. Morbi malesuada nulla sit amet est hendrerit tincidunt. Etiam viverra, nisl id volutpat eleifend, est augue sodales orci, […]
L&D Strategy
Transfer of learning: The necessary step to make learning stick
Transfer of learning is a concept that should be top-of-mind when planning any learning and development program. Why? In a perfect world, the billions of dollars organizations collectively spend every […]
Starts With A Bang
Why we’ll never see back to the beginning of the Universe
We thought the Big Bang started it all. Then we realized that something else came before, and it erased everything that existed prior.
Thinking
Is there an afterlife? See how your answer compares to polled Americans
There is more consensus on what heaven looks like than hell.
Thinking
How science changes the way we think, according to 10 leading scientists
A group of prominent scientists shares how research has changed them.
Up Next
Guest Thinkers
Of Motorcycles, Mozart and the Nature of Tolerance
The motorcycle gang pulled in to the parking lot in a small town in upstate New York. They put down their glistening kickstands and sauntered into the grocery store, one […]