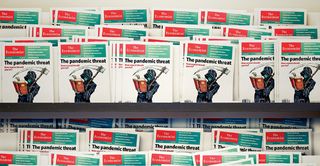 The July/August “Ideas” issue of The Atlantic (still available on some newsstands) is chock-full of innovation goodness, including one of the best-written articles that I’ve read in some time about the future of the newsweekly. Michael Hirschorn looks at the experience of The Economist, which actually added advertising pages last year (up 25%), gained subscribers and expanded circulation at a time when similar types of publications were experiencing double-digit declines, and asks a simple question: Why has the Economist been so successful when other weekly news magazines have not?

After ruminating on how the digital age has changed the way people consume news & information, Hirschorn identifies several possible reasons for the success of The Economist:

1. Quality and breadth – “The Economist is truly a remarkable invention – a weekly newspaper, as it calls itself, that canvasses the globe with an assurance that no one else can match. Where else, really, can you actually keep up with Africa?”

2. Ability to distill the news and offer a point of view – “The Economist has reached its current level of influence and importance because it is, in every sense of the word, a true global digest for an age when the amount of undigested, undigestible information online continues to metastasize…”

3. Smart analysis & razor-sharp clarity instead of original reporting – “The Economist virtually never gets scoops, and the information it does provide is available elsewhere… if you care to spend 20 hours Googling.”

What’s interesting is that The Economist has managed to do all this without knowingly adapting to the realities of Web 2.0. In fact, even Hirschorn admits that The Economist “has never had much digital savvy.” The Economist, which almost demands to be seen first and foremost as a print publication rather than a Web publication, appears to stand alone on the Web, un-linked to other sources of news & information: “While other publications whore themselves to Google, The Huffington Post, and the Drudge Report, almost no one links to The Economist. It sits primly apart from the whole orgy of link love elsewhere on the Web.”

At the end of the day, The Economist feels like “the only magazine you need to read. You may like the new Time and Newsweek. But you must – or at least, brilliant marketing has convinced you that you must – subscribe to The Economist.”