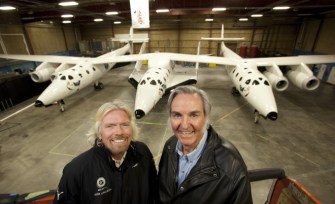 Two visionaries – billionaire Richard Branson of Virgin Galactic and legendary aircraft designer Burt Rutan of Scaled Composites – are leading the push for commercial space travel by the year 2011. Last week, the duo unveiled SpaceShipTwo — the first-ever commercial spaceship for making sub-orbital space flights for everyday citizens. (Well, not exactly “everyday,” since the cost of a single flight will likely exceed $200,000 but you get the idea).

Flight testing for SpaceShipTwo could start within the next few months and by the end of 2010, Branson and Rutan hope to unveil a new space port in the New Mexico desert. According to WIRED magazine, already 300 potential passengers have plunked down the advance cash for the chance to make the sub-orbital passenger flight.

The projected dates are likely to change — think of all the hoopla around the new Boeing Dreamliner and all the concomitant delays over the past two years — but it’s still exciting to think that the next decade may be the decade of private space travel.

[image: Richard Branson and Burt Rutan with SpaceShipTwo via WIRED]

n One of the most misunderstood terms in the business world is disruptive technology. Too many companies — and the marketers in charge of bringing these companies’ innovations to market […]