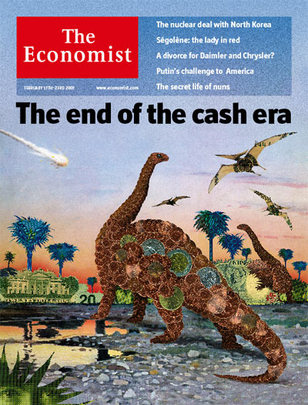 A picture, as they say, is worth a thousand words. This was the cover of the February 17 issue of The Economist: “The end of the cash era.” With electronic payments and various forms of digital money on the rise, the era of coins and bills could be nearing an end: “Cash, after millennia as one of mankind’s most versatile and enduring technologies, looks set over the next 15 years or so finally to melt away into an electronic stream of ones and zeros…”

What better way to approach this topic than from an evolutionary perspective? In this image, dinosaurs comprised of coins and pterodactyls comprised of dollar bill fragments are being showered by cosmic meteorites in the ultimate dinosaur doomsday scenario. In the background, the U.S. $20 bill stands lonely vigil over a decimated economic landscape.