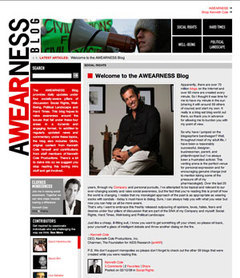 For the past 25 years, Kenneth Cole has been an innovator in the fashion world. In the 1980’s, he was the first designer to combine fashion with philanthropy; he has also consistently pushed the edge in his advertising campaigns in an attempt to spark public debate about AIDS, homelessness and social injustice.

Kenneth Cole is now embracing the Internet as a way to have a more personal and interactive dialogue with people who also feel passionately about social issues. On February 18, he launched the AWEARNESS blog, an issues-oriented website that addresses four major social issues: homelessness & poverty, social rights, health, and political justice. In addition to weekly commentary from Kenneth himself, the site will also feature content from a number of guest contributors — including high-profile photographers, actors, musicians, filmmakers, artists and writers.

Full Disclosure: My colleagues at Electric Artists have been readying this AWEARNESS blog for the past six months, and we’re proud to be joining forces with the team at Kenneth Cole Productions on this endeavor as we raise awareness around important social issues. If you’re interested in contributing your thoughts about any social issues on the AWEARNESS blog, just let me know via e-mail, and I’ll pass on your request to the editorial staff. Just off the top of my head, I think topics around “social” innovation and “social” entrepreneurship would be particularly well-received.