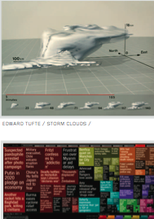 In the current issue of Contagious Magazine (subscription required), Noah Brier and Faris Yakob of Naked Communications have prepared a tour de force article about the new age of social (meta)data. Data is no longer just boring old data — it is now a wonderfully fluid and shareable construct that is open to a rich number of interpretations (and re-interpretations). Prior to Web 2.0, if you mentioned the word “data” to a colleague, you were likely to receive either a blank stare or one of those “please, don’t go there” type of looks.

Now, thanks to pioneers like Jonathan Harris and Hans Rosling, data is a construct that can be celebrated visually through rich infographics and real-time visualization tools. Anyway – if all this is not so clear – the Contagious Magazine article includes a splendid number of visual examples from the likes of Google, Yahoo and Nikon. (And, of course, examples from the great Edward Tufte.)

p.s. Kudos to Noah & Faris for sneaking in an obscure reference to French Deconstructionist thinker Jacques Derrida at the end of the article: “This blending of signifier and signified is peculiarly modern – words have no real connection to the concepts they represent.” Ah, the joys of modern literary theory, updated for Web 2.0!