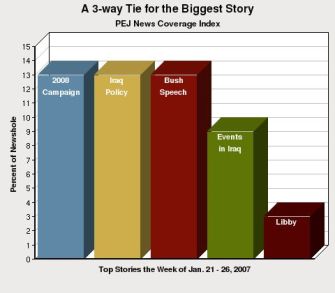 Scientists and environmental advocates will watch with excited anticipation on Friday as the policymakers’ summary of the Intergovernmental Panel on Climate Change is released in Paris, France. The IPCC reports are designed to be the most important events in climate science and policy, gathering world experts to craft an authoritative summary of the state of human understanding. Yet here in the United States, if past trends are predictive, the IPCC report is unlikely to make a major dent in the news or public agenda, much less shift public opinion.

As the Pew analysis (pictured above) of last week’s major stories indicates, Iraq continues to dominate headlines, while 2008 horserace speculation comes in a close second. Up against these juggernaut narratives, the IPCC release is unlikely to compete for air time and column space. Nor is it likely to break through the powerful partisan lenses of the American public, with striking differences in the perception of reality across party lines.

Consider the graph below. Even at the daily newspapers, the media heavily favors drama and conflict, rather than the technical nature of a scientific consensus statement. The figure compares the amount of media attention to the previous 2001 IPCC report with that generated by the 2004 release of the science fiction blockbuster The Day After Tomorrow and the 2006 release of Al Gore’s Inconvenient Truth. Not surprisingly, both films far surpass the IPCC report in generating media attention, but fall well short of either Fahrenheit 9/11 or Mel Gibson’s Passion of the Christ.

Note: Data on the IPCC report, the Day After Tomorrow, Fahrenheit 9/11, and Passion of the Christ is taken from a previous study published by Anthony Leiserowitz. Consistent with the method used in that study, the relative media agenda-setting impact of Inconvenient Truth was calculated by searching the headline and lead paragraph of major national and regional newspapers including the New York Times, Los Angeles Times, USA Today, Washington Post, Chicago Sun-Times, Denver Post, Boston Globe, and the San Diego Star Tribune for the two month period leading up to the May 24, 2006 New York/Los Angeles release of the film and the two weeks following its opening.