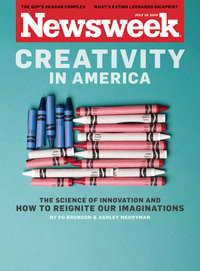 The current cover of Newsweek – The Creativity Crisis in America – admittedly had me intrigued, especially given all the press that Newsweek has generated of late about a potential sale to a new buyer. Is this cover a prescient, forward-looking attempt to spot a crisis before it even emerged, solidifying Newsweek‘s reputation for spirited, journalistic debate — or just one last desperate attempt to grab readers with a sensationalist premise?

Po Bronson and Ashley Merryman (co-authors of NurtureShock: New Thinking About Children) conclude that creativity in America really is on the decline, especially for America’s youth. Since the 1990’s, creativity scores for children K-6 have steadily ticked downward, and there’s no sign that these scores will reverse themselves anytime soon. Over time, this adds up, since non-creative youth rarely grow up to become creative adults (and vice versa).

One of the culprits, of course, is pop culture – kids play too many videogames and watch too much TV. But another culprit is the way our schools approach creativity. As Bronson and Merryman point out, there is simply “no concerted effort to nurture the creativity of all children.” At the same time as the U.S. is rushing to embrace standardized curricula and nationalized testing, the rest of the world is heading in exactly the opposite direction:

“Around the world, though, other countries are making creativity
development a national priority. In 2008 British secondary-school
curricula—from science to foreign language—was revamped to emphasize
idea generation, and pilot programs have begun using Torrance’s test to
assess their progress. The European Union designated 2009 as the
European Year of Creativity and Innovation, holding conferences on the
neuroscience of creativity, financing teacher training, and instituting
problem-based learning programs—curricula driven by real-world
inquiry—for both children and adults. In China there has been widespread
education reform to extinguish the drill-and-kill teaching style.
Instead, Chinese schools are also adopting a problem-based learning
approach.


[Jonathan] Plucker recently toured a number of such schools in Shanghai and
Beijing. He was amazed by a boy who, for a class science project, rigged
a tracking device for his moped with parts from a cell phone. When
faculty of a major Chinese university asked Plucker to identify trends
in American education, he described our focus on standardized
curriculum, rote memorization, and nationalized testing. “After my
answer was translated, they just started laughing out loud,” Plucker
says. “They said, ‘You’re racing toward our old model. But we’re racing
toward your model, as fast as we can.’ “

At the end of the day, there probably does need to be some sort of more coherent U.S. national strategy for fostering creativity in our schools rather than “praying for a Greek muse to drop by our houses.” Yet, the so-called creativity crisis fails to account for a singularly astounding fact — at the same time that creativity scores are falling (as measured by the Torrance CQ tests), America’s youth have been responsible for the creation of some of the world’s most innovative and creative technological start-ups. The rapid proliferation of technology throughout American society is creating a super-class of young kids who are literally hard-wired into technology from the time they leave their cribs. They are learning how to use both sides of their brain and, based on the findings of Steven “Everything Bad is Good for You” Johnson, children are actually using video games to become more creative, not less.

If nothing else, I’m guessing that there’s enough material here for a follow-up book to NurtureShock. Education is one of those evergreen controversial topic areas that, if handled correctly, can spark vigorous debate and discussion on a nationwide basis.