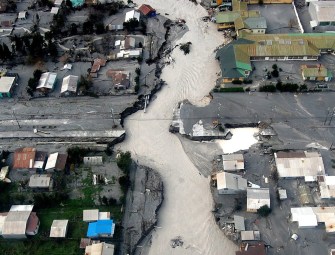 ONEMI, the Emergency Office of Chile, is expressing concerns that Chaiten might be readying an even bigger blast than what we’ve seen already in the past few months. In particular, ONEMI direction Carmen Fernández is concerned that the volcano might have a major explosion with accompanying ash fall and pyroclastic flows. They are pointing to the increased seismicity at depth under Chaiten as potential evidence that the conduit to the surface is partially blocked, and thus building pressure for a large explosion – think Augustus Gloop in Charlie and the Chocolate Factory if you want a mental picture.

Now, it is hard to tell from the evidence in the article whether this seems likely or not, but usually deep seismicity under a volcano means that magma is moving – and when magma is moving, it is usually moving upwards to the surface, which means eruption if it makes it all the way. The SERNAGEOMIN agrees with some of the ONEMI suggestions (covered nicely on the Volcanism Blog), but overall, the feeling I get from reading these reports is that the Chilean officials are playing this with an abundance of caution, and rightly they should. As I’ve mentioned, we are now in somewhat uncharted seas when it comes to historical volcanic eruptions in the modern era, so making a prediction for Chaiten’s next move is tricky business.