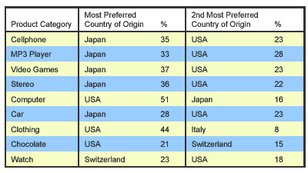 Apparently, young Americans have little or no idea of where the best innovation in the world is taking place. When in doubt, they simply assume innovative high-tech products come from Japan or the U.S. Despite hundreds of millions of dollars spent on global marketing campaigns, European and Asian technology companies are having a tough time differentiating themselves from their U.S. and Japanese rivals.

No wonder that when it came to expressing a preference for MP3 players, cellphones, video games, stereo equipment and cars, people overwhelmingly showed a predilection for Japanese products. Which led the head of Anderson Analytics to conclude, “For the most part, this next generation of educated American consumers

assume everything comes from the United States, Japan or Germany.”

[image: Most Preferred Countries of Origin via Trendspotter]