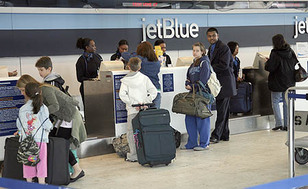 The past two weeks have been rough for JetBlue. Just before Valentine’s Day, the snow and ice that swept through the Northeast paralyzed the airline company’s operations in New York, leaving customers stranded on planes for up to 10 hours at a time. From clips that I watched on the local news, the scenes at the airport were just plain ugly – the toilets of the planes were literally overflowing, bags were stacked high at the airline terminal, people were screaming and passengers were begging the pilots to just cancel the flights and let them go home. (According to some reports of what went down, the airline even enlisted the help of riot police to deter any effort by long-suffering customers to vent their frustrations.) In five days, some 1,000 flights were canceled and JetBlue suddenly became the poster child for what’s wrong with the airline industry. Not surprisingly, the company has been playing damage control for the past few days, coming up with ideas like a Customer Bill of Rights in an effort to minimize the negative fall-out from the incident.

The shame is that JetBlue was once viewed as one of the most innovative companies in the U.S. Seemingly, it could do no wrong. Airline passengers loved them, as did Wall Street investors. Now, the business press is taking the company to task for not acting more like a legacy carrier. According to Alan Murray in the Wall Street Journal, JetBlue is now “just another airline in a lousy business.” In short, a “days-long operational meltdown” will likely force the company to adopt changes that will make it a bit more like its ‘legacy’ rivals. Forget about innovation for a little at JetBlue until the company gets its house in order.

to deal with flight cancellations and inclement weather, there had been

oil price risk, and was getting whipsawed by the big spikes in oil

prices. In addition, the company’s cost structure has been ballooning of late, as a result of expansion plans across the U.S. So maybe the problems with the flight scheduling over the past two weeks are symptomatic of a bigger problem at JetBlue — the inability to scale innovation. Maybe innovation is possible when you’re a regional carrier, but things start to fall apart once you become a national carrier?

What do you think? Is the “Valentine’s Day Massacre” a short-term blip on an otherwise stellar record of achievement of JetBlue — or a disturbing sign that the company has lost its innovative edge?