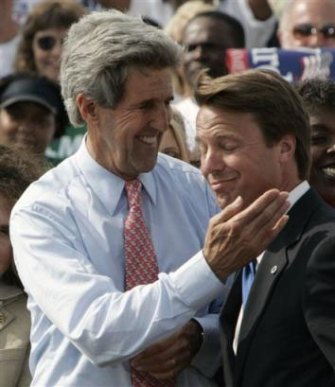 On YouTube over the weekend, John Edwards announced his candidacy for president. Apart from his “Two Americas” theme on economic and racial justice, science issues stand as a secondary part of his platform.

On ABC News This Week, Edwards was asked by host George Stephanopoulos about his positions on global warming, as well as the environment and free trade. The transcript of his answer appears below, and the video of the full interview is available at ABC News.

STEPHANOPOULOS: What kinds of sacrifices will Americans have to make to make us energy independent to combat global warming?

EDWARDS:They’re going to have to be willing to give up some of the vehicles that they drive and I myself have driven. They’re going to have to be willing to conserve in the use of energy in their homes. There may be other things that will be required. I mean, we have some very serious issues about our carbon – use of carbon-based fuels, you know, there are intermediary steps that can be taken, capping trade. There are a number of things that can be done to reduce the use of carbon-based fuels, but at the end of the day we may be faced with more serious choices. You know, people are concerned about a gasoline tax, including myself, because of its regressive nature – you can’t take it off the table. You know, our carbon tax which Vice President Gore has been talking about, is it a necessity? Not yet.

STEPHANOPOULOS: But you’re open to it.

JOHN EDWARDS: Not yet – I would never take those things off the table but people who think that global warming is a problem for our grandchildren are living in never-never land. If you’re under the age of 60 and we don’t change the course that we’re on now there is a significant chance that global warming is going to affect your life. And the American people have got to engage on these kinds of issues. We can’t stay at home, complain that somebody else is not doing their job and hope somebody else is going to solve the problem.

STEPHANOPOULOS :Vice President Gore calls himself carbon neutral. You know, whenever he flies or drives, he pays back the carbon he’s using.

EDWARDS: Yeah, he better than me.

ON THE ENVIRONMENT AND FREE TRADE:

STEPHANOPOULOS: And on trade, no more free trade agreements unless there are labor protections and environmental protections.

EDWARDS: Can I be really precise about this?

EDWARDS: Because this gets muddled over a lot. I think trade is important, important for America, very important to the developing world where I’ve spent some time over the last couple of years, and I have a personal investment in seeing those countries and those people be lifted up. So I think trade matters. What I really believe is we need a trade policy that has labor and environmental protections that are achievable by those countries. If they’re being used as a rouse to create a protectionist barrier then I am not for that.

STEPHANOPOULOS: But what if the countries say, you know, you may think they’re achievable, they don’t – they don’t sign on to the agreements?

Related
Life
Visualization test
Lorem ipsum dolor sit amet, consectetur adipiscing elit. Nullam id tincidunt mi. Morbi malesuada nulla sit amet est hendrerit tincidunt. Etiam viverra, nisl id volutpat eleifend, est augue sodales orci, […]
L&D Strategy
Transfer of learning: The necessary step to make learning stick
Transfer of learning is a concept that should be top-of-mind when planning any learning and development program. Why? In a perfect world, the billions of dollars organizations collectively spend every […]
Starts With A Bang
Why we’ll never see back to the beginning of the Universe
We thought the Big Bang started it all. Then we realized that something else came before, and it erased everything that existed prior.
Thinking
Is there an afterlife? See how your answer compares to polled Americans
There is more consensus on what heaven looks like than hell.
Thinking
How science changes the way we think, according to 10 leading scientists
A group of prominent scientists shares how research has changed them.
Up Next
Guest Thinkers
NY TIMES SPONSORS READER FORUM ON ENERGY AND ENVIRONMENT: Word is that Series Will Continue in 2007, and that the Innovative Beat is the New Normal at the Times
In more than 20 articles over the past year, a team of New York Times reporters and editors have detailed many of the intersections between energy policy and the environment. […]