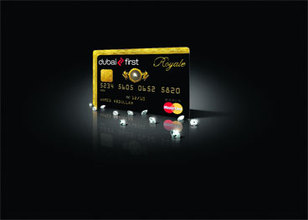 Dubai is turning into the new trendsetting playground of the rich and famous. In addition to the world’s most luxurious hotel – the Burj Al Arab Hotel – the tiny emirate now also boasts the world’s most prestigious credit card. The new Dubai First Royale Black is a diamond-encrusted black credit card with no preset spending limits and special concierge services at elite destinations. Moreover, the card is available only by invitation. For good reason, the new Dubai First Royale Black MasterCard is certainly attracting its fair share of attention in the petrodollar-rich emirate of Dubai:

“Hownwould you like to own a credit card with a solitaire diamond embeddednin it? Can you imagine the look on the faces of your fellow diners whennyou casually whip it out and hand it over to the waiter to pay thenbill? And, to make things even better, there is no pre-set spendingnlimit on the card.

Beforenyou go running to apply, here’s the catch – the Dubai First RoyalenMasterCard is by invitation only and as the name “Royale” suggests isnonly for the VIPs of UAE society and the movers and shakers of thenbusiness world.“

Sounds great – but exactly how innovative is this Royale card anyway? It sounds like the card was created by a pack of consultants who analyzed the best-in-class credit cards throughout the world and then combined the best of these features into a new, super-duper elite credit card. As Hasani Gittens of the New York Post pointed out, the card obviously draws inspiration from the American Express Black Card, the purple World MasterCard and the Visa White Card. Plus, the diamond touch is something straight out of the Vertu playbook. Instead of coming up with a truly disruptive product, it looks like MasterCard simply made a few incremental improvements to existing card offerings.