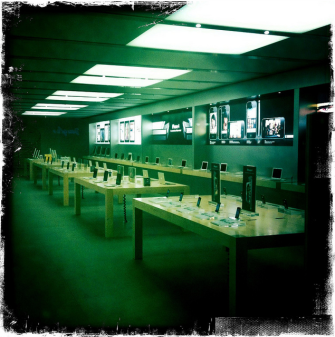 We’re experiencing a retro-digital (or is post-digital?) movement in the tech world: just today, I read about a gaming company (Discovery Bay Games) that has figured out to convert your bright, shiny Apple iPad into the type of tabletop board game that you played decades ago. That’s not all: think yellowed-out Hipstamatic photos that look like they were taken with a Polaroid rather than a 6-megapixel digital camera; aggressively anachronistic smart phone ring tones that sound like old telephones; iPad and Twitter apps that duplicate the look and feel of newspapers (newspapers!); and modern videogames that re-create the look and feel of 8-bit games like Pac-Man or Asteroids. And, of course, my favorite – an iPad carrying case that looks like a big, dusty, smelly book. So what gives?

One explanation is that young digital hipsters are purposely embracing these analog anachronisms as an ironic cultural statement. Another possible explanation is that older Baby Boomers have embraced the Internet in sizable enough numbers that they are now directly impacting digital culture in the same way that they have impacted every other aspect of culture. The same way that it now makes perfect sense that 70-year-old musicians are playing halftime shows at the Super Bowl, it makes sense that digitally-minded Baby Boomers are waxing nostalgic about the good ol’ days of land lines, wires and clunky floppy drives.

The final explanation is perhaps the most logical — that the retro-digital movement is actually a sign that the digital and analog worlds, so long separated, are now becoming one. The Internet is no longer something that divides generations, or something that is somehow separate from our everyday life. When 80-year-old grandmothers are on Facebook and young kids are toting around Wi-Fi enabled iPads instead of backpacks you know that the Internet is almost as ubiquitous as electricity. There are no longer “online campaigns” or “offline campaigns,” there are just campaigns.